In memoriam of my beautiful Laney 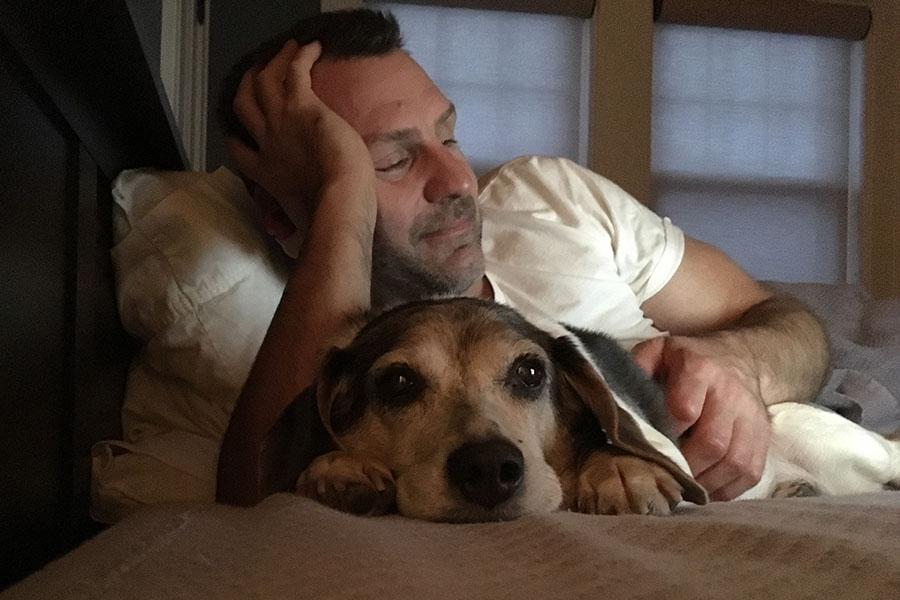 On November 26, 2017 we had to say goodbye to our beautiful baby girl, Laney. I needed a month to get to the place where I could write her Memoriam to celebrate her purposeful life and find closure. 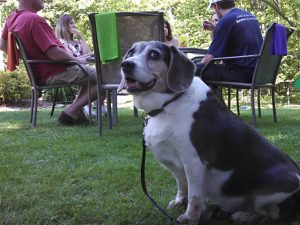 Laney’s passing was mercifully relatively quick and peaceful. She just had an amazing Thanksgiving with the whole family – her favorite thing in the world. She seemed as healthy, happy and spry as ever. But she got very ill late that evening. In the morning, at the emergency vet, she was diagnosed with massive, inoperable cancer of the liver and we had to say goodbye at approximately noon. She past peacefully in the hands of Lisa, my mother and me.

Faced with the decision of cremation or burial, I let the sunny, beautiful day decide for me. We had a short funeral for her in my brother and sister-in-law’s back yard. It was the perfect way to say goodbye.

Laney’s arrival into our lives

My girlfriend, Lisa picked out Laney. We were helping our friends at Marilyn’s Voice (a fantastic dog rescue organization that my family is involved with) with one of their events in February of 2012 – exactly one year after the passing of my beloved Bowser. 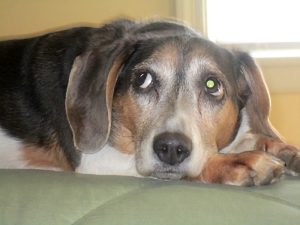 They had a board on the wall with pictures of the dogs that they had available for adoption. Lisa, who had saved a stuffed animal of a beagle since childhood, took one look at Laney’s picture and it was love at first sight.

I’ll never forget the first time we saw Laney. We went to her foster’s house in Richmond Hts. Standing in the driveway, she let Laney out the back door. She came bouncing down those stairs to us like we had just been away on vacation and were coming to get her. Our introduction continued in the house where she put on a show playfully jumping on and off the couch. Though already seven years old, she had the spirit of a young puppy.

Each dog is unique

Having had dogs my entire life, I can tell you that each has personalities and characteristics unique to them. Laney’s single strangest trait was her love of seafood  – in particular salmon! Absolutely her favorite food hands down. A typical, ravenous beagle for sure. But, every time Lisa pulled her weekly salmon out of the oven, it was like being assaulted by 30-pound Mexican Jumping Bean. 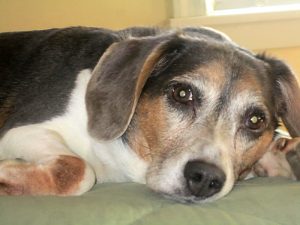 February 2012. This is the way she always looked at me.

Her other uniqueness, unfortunately, was getting attacked by other dogs. No idea why other dogs wanted to fight with my gorgeous little girl so much, but it was a chronic problem.

I’ve also heard that beagles are stubborn by nature. Laney seemed to get an extra helping of that. Our long daily walks consisted of her pulling in the opposite direction while I threatened to put roller skates on her.

Lisa and I lived a mile apart in Cleveland Hts for several years of our relationship. Laney and I typically spent the weekend at Lisa’s house, but retreated back to my house for the work week. The three of us formed a tight bond over the first two years together. We were a family on the weekends. And Lisa and I always talked about the day when we would all live together full time. Then, in October of 2014, Laney got very ill. 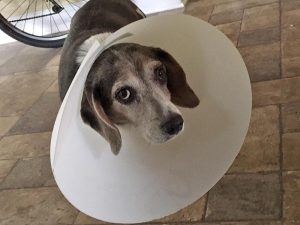 October 2016. This isn’t from her 2014 surgery – here she just had a growth removed from her eyelid.

Lisa and I had my mother, brother, and sister-in-law over for dinner – something that Laney would normally be incredibly excited about. However, I was concerned as she could hardly muster up any enthusiasm when greeting them. Noticing her absence during dinner, I found her sitting facing the wall in my upstairs office. She was clearly very ill.

I was up with her all night as she became septic. We went to the emergency vet. I carried her near-lifeless body into the ER. A short time later, we were faced with the decision to do exploratory surgery or probably let her go. It was very expensive, but we went ahead with the surgery.

A few hours into the surgery we received a call from the doctor explaining that half of her intestine was blackened – basically dead. She explained that she could remove it and Laney would have about a 50/50 chance of survival. Whatever caused it would remain unknown and could possibly reoccur. We opted to move forward.

Laney’s recovery was a slow and painful process 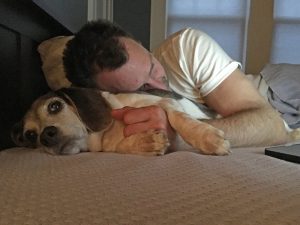 I was allowed to visit Laney twice per day during her 6-day recovery period. I’d bring a blanket to put on the floor of our small waiting room. The tech would bring her in and I would lay with her, usually under the desk, holding her. I developed a mantra that I would whisper in her ear over and over:

“I love you little girl.

You can’t imagine the bond formed going through this challenging time together. The mantra would continue daily for the rest of her life.

For several long, painful days, the doctor kept saying “50/50 chance” . Then on about Day 6, she said that the tech got a little tail wag when he came to check on her. We got upgraded to 60/40. A couple days later, Laney was cleared to come home.

The successful surgery bought us exactly 3 years and 1 month of additional time together. We cherished every minute of it and I looked at each day as a blessing, knowing that she wouldn’t have the typical life expectancy of your average beagle. She past at 12.5 years old. 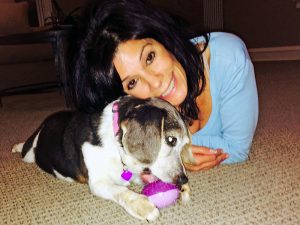 Laney had one thing that she loved above all else – Lisa and I being together. She loved our weekends when we came together as a family. She would just melt when Lisa and I petted her together and was in complete bliss simply laying on her favorite couch in the living room keeping watch over us.

The thing she disliked most was our Sunday evening ritual – going back to my house. Lisa and I would charmingly laugh at Laney’s “protests” as she would barely peek her head around the corner of the foyer as we called her to say our goodbyes. We always talked of the day when we’d all live together permanently. But, both being single our whole lives and very independent, that day always seemed be in the “near future”.

Laney’s quick departure hit us by surprise and hit us hard. Lisa and I have lived together since her death – quite happily, I’ll add. We have a lot of guilt about not being able to share this with Laney, as it was the one thing she wanted more than the skin off our salmon. But, she didn’t die in vain. We do believe she’s in a better place and extremely happy that she brought us so close together.